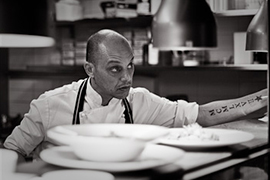 Neale White has been chef and owner of Papa Goose restaurant since its inception 4 years ago. Neale started his cheffing career in London, England more than 20 years ago training under notable chefs such as Gordan Ramsey, Marcus Waering, Stephen Bull and Richard Corrigan.

During his 10 year stint in London he won a number of accolades including Young Chef awarded by the Egon Ronay Guide. As a young chef he established himself at the forefront of the dining scene and rapidly rose to running restaurants such as Cafe de Paris and Saint. From England he went to Malaysia for a year and worked as a consultant at a number of restaurants.

After more than a decade overseas a move back to Australia was calling and sea change to Byron Bay  was on the cards. He worked as chef and partner in a number of restaurants there while also consulting at numerous restaurants in Sydney
and Brisbane. In 2003 he moved to Melbourne and helped to set up the well-regarded Southbank restaurant Pure South. Upon it's launch it was given favourable reviews by critics and won it's first 'chef's hat' within 12 months. He spent 4 years at the helm working as executive chef before moving
on to work as a restaurant consultant on a full-time basis. He worked as a consultant for 2 years before finding the perfect site to launch his own restaurant, Papa Goose.
Papa Goose's modern British theme harks back to his days in London with a focus on seasonal produce and contemporary techniques.